Trials of a Trail

Trials of a Trail 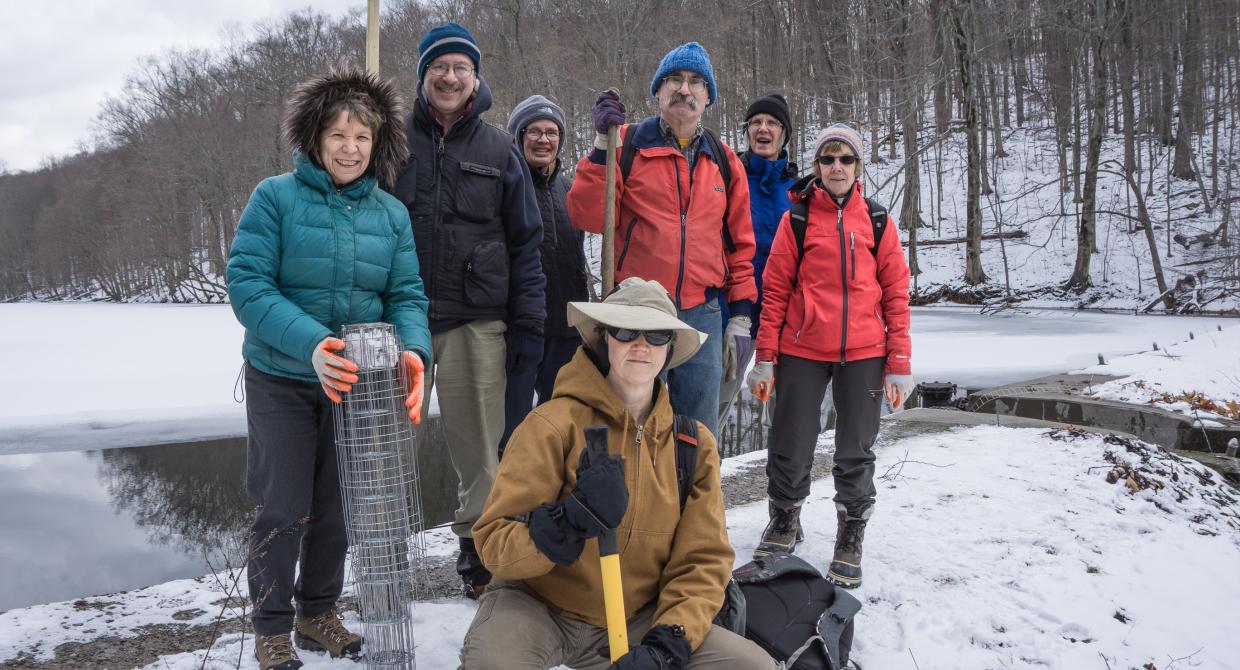 Beaver activity and wet weather may have forced the Trail Tramps to build (and rebuild) new trails in Teatown, but a sustainable trail system now exists.

When Daniel Chazin asked me to recount the work my Trail Tramps Crew had done on the “new” Three Lakes Loop trail in Teatown, I realized that much of the work we had done was no longer part of any trail. Sometimes nature intervenes, and plans and visions for a trail system change.

A little history: The Three Lakes Loop is comprised not only of new trail but also of many preexisting trails. Both the new and old trails have undergone name changes and other tweaking. The Tramps did a lot of new trail construction after Teatown acquired the Vernay Lake property in 2011. We did a major reroute of an existing trail off the power lines. We also built several of the stream bridges and blazed and re-blazed routes when trail designations were changed. And we have cleared the beaver dams and worked on beaver deterrent projects on the Shadow and Vernay lakes. It was never-ending and often frustrating work. If only we could recruit and train beaver for trail work!

As new and existing trails and trail sections were added, it became apparent that there should be one trail: the Twin Lakes Trail. Unfortunately, one of the new sections turned out to be more beaver- than hiker-friendly. Tramps built a roughly 100-foot boardwalk, a trail section which had to be relocated almost as soon as it was completed, and a “paved” highway. Maybe we should have known. Obviously, it was a wet area to begin with. Hence the boardwalk, reroute, and pavement. It held up for almost 3 years. Then a combination of beaver activity and an exceptionally wet year contributed to a water table rise that flooded trail and boardwalk and forced closure of the area.

It is discouraging. But we have accepted that good things have resulted from this experience. We learned a lot about building in problem areas. A more sustainable trail system now exists. And the Twin Lakes Trail has been consolidated with existing Teatown trails to form the Three Lakes Loop. The best result is that this section will now be used for education and research by Teatown and its student and science participants. Tramps are very excited to see what happens next. Who knows—sometime in the future, there may even be a trail reincarnation!

So, the next time you visit Teatown, take Daniel’s hike. Or, check out the Trail Conference’s newly released Westchester Trails map set and plot your own hike through this lovely preserve, which features three lakes, hills, forests, and even a hidden valley! But don’t look for the boardwalk—it was dismantled last summer.