From her 2016 SOBO A.T. thru-hike to joining the Bear Mountain Trail Crew this season, Yuliya AKA Kremlin shares her experience of what the Trail means to her and the importance of giving back.

One of the major reasons I went to hike the Appalachian Trail in 2016 was to figure out what it is I wanted to do career-wise.  Since high school, we are supposed to know this—whatever “this” is, the thing that we are supposed to do for the next 50 years of our lives. At 16, where did I see myself for the next 50 years? I didn’t see anything. I just wanted to kiss boys, pet dogs, and go on adventures.  It scared me to death when others would know exactly what they were going to major in in college. It made me feel inadequate. No one told me that no one knows for sure, really. I learned that on my Appalachian Trail thru-hike a decade later.

Before the long trek, I worked so many different jobs in drastically different industries. But it was all for the money, and so it was becoming meaningless. It did not fulfill me. Something had to change. Making more money was not making me any happier.  It was stressing me out, actually. In those days, I felt like I had to do more of what I didn’t want to do to make more paper.  So I walked the A.T. to figure it out. 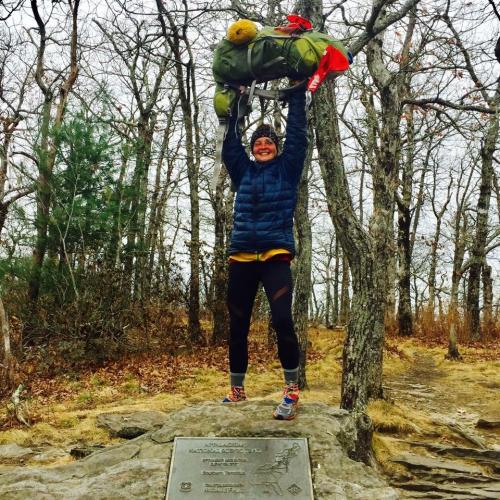 After I completed the Trail, I sure knew what I didn’t want to do. And I at least had a slight idea of what I sort of wanted to do—be outside. I made it my mission, and decided that I would rather be rich in experience doing what I enjoy than be miserable and rich swimming in green paper.

I had been following Eduardo @themistocles_of_ntr on Instagram for some time and I would see him post photos of hiking sweet mountains and doing some work on the trail: moving rocks, wearing a hardhat, using big boy tools I didn’t know the names for. I messaged him and asked what it was that he was doing for work. That is how I found out about AmeriCorps and the Trail Conference Conservation Corps and instantly thought it was the coolest gig ever. I had to do it, too. I was always wondering how trails were built as I hiked through, but the thought never lingered for long. I would always thank all the volunteers fixing the trail on my hikes and just pranced on.  I decided I want to make these big boy trail-building tools into big girl trail-building tools.

I researched the program, was thoroughly impressed by everything it entailed, and waited for the posting to apply. It was important to me to give back to the Trail because I took so much from it. The Appalachian Trail had been such a great teacher to me for six months and transformed me into a better, happier human for years to come. It just made sense to give back to her for six months to be even.  An awesome interview later, I was in for the 2018 season on the Bear Mountain Crew finishing the Appalachian Trail reroute project. As the season winds down, the 14-year Bear Mountain Trails Project is complete—and my crew was a part of it! I gave close to six months of sweat back to the A.T. and I know she is impressed and proud of all of us. It has been such a rewarding and valuable experience to be on the Appalachian Trail for another whole summer, and I am forever grateful for the opportunity to be a part of this piece of greatness this season. 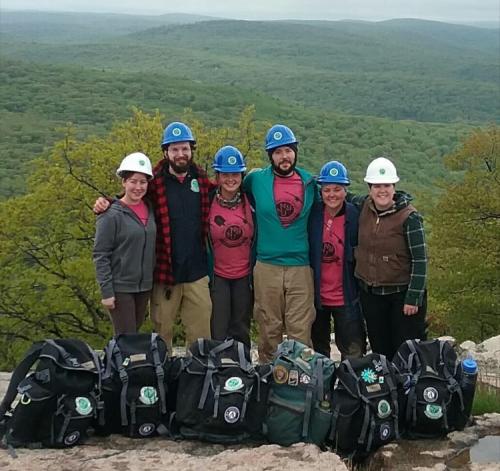 I grew so much mentally and physically with Trail Conference. I didn’t get my trail legs this time around, but definitely got me some trail builder biceps! We worked in cold rains, hot, humid afternoons, and barely dodged lighting strikes once. We had sore bodies for weeks, fractured and pinched fingers, mud and rock dust from head to toe, and numerous meetings over dirty dishes in the sink in camp. But through all that, we also knew that this was exactly where we all wanted to be with some of the most amazing, strong minded crew members and dedicated volunteers I’ve ever met, amazing people who are passionate about the Trail with the same intensity as I. I am grateful to have worked along these wild humans whom I now consider family.

My name is Yuliya Semenova. I am from Russia. My home base is New York. I am an Appalachian Trail thru-hiker. My trail name is Kremlin, and I build trails with big girl tools. Where do I see myself in the next few decades? On the Trail, that is for certain.